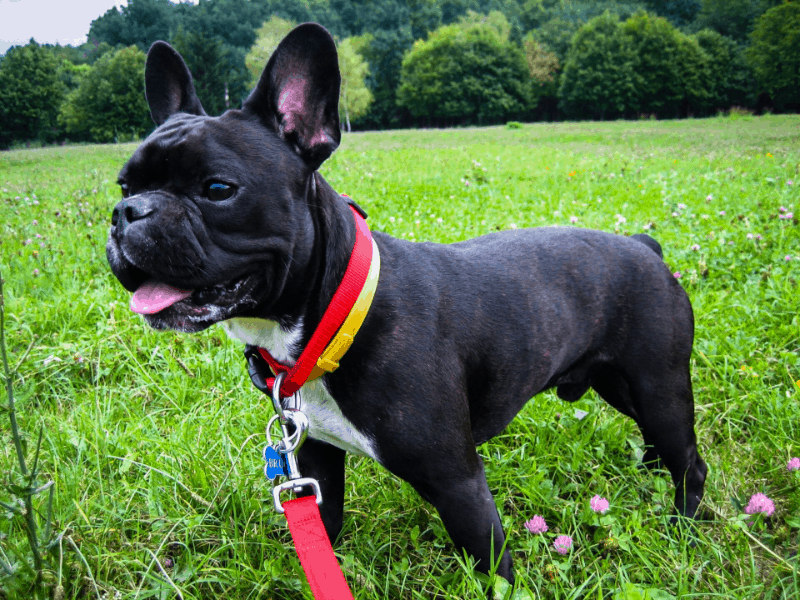 Available French Bulldog information states the breed was derived by breeders in England wanting a miniaturized version of the English Bulldog. The majority of the breeding was carried out around the Nottingham area by lace makers.

When the lace trade died off in England, many of the lace makers moved to France in search of work – and their dogs went with them. They were an immediate hit and acquired the name French Bulldog. They were especially popular with the Parisian “Belle de nuit” (ladies of the night!) and the French upper classes.

Although the original Frenchies had rose ears, which are folded over, it was when the breed hit America, the bat-like ears were favored. Their most distinguishing feature, the bat ears, did not go down well with the original European breeders. It was only through the persistence of a newly formed French Bulldog Club of America, that the bat ears eventually became a breed standard.

The breed exploded in popularity in the early 1900s reaching a peak in 1913.

French Bulldogs have a wide head and shortened face with a black nose. The ears should be “bat-like” and standing proud on the top of the head.

The large eyes are set wide apart and the dogs have an intense stare full of intelligence and curiosity.

They were originally bred for bull-baiting, so have a heavy deep and muscular chest. The legs are short and muscular, especially the forelegs.

The coat is short and thick and the most common colours are dark brindle, fawn, white and pied (white with patches of dark brindle or fawn).

They are naturally born with a very short tail which is either bunny style or corkscrew.

Apart from their inquisitive and loving stare, the main attraction of Frenchies is that they have an endearing personality and make a wonderful companion dog.

They develop a superb and affectionate connection with their owners.

They are more suited to indoor living so will want to spend most of the time on the couch beside you.

This breed needs companionship and will not thrive without it. The Frenchie cannot be owned and ignored.

They get along well with other dogs, animals and children.

Their deep affectionate relationship with their owners can cause problems in that they can suffer from separation anxiety if left alone for long periods.

This can also lead to unwanted behavior as they vie for their owner’s attention.

French Bulldogs are normally a healthy breed but there are certain illnesses to which they are prone.

These include joint problems, thyroid problems and hereditary cataracts in their large eyes.

Being short-nosed, they can suffer from breathing problems.

Because of their shortened restrictive airways, it is also more difficult for them to regulate their temperature and can easily overheat and get heatstroke.

They can only withstand short periods of exercise which is another advantage to them being more suited as house dog.

French Bulldogs are very intelligent and can be easily trained with one major caveat. Being a bull breed they can display extreme stubbornness on occasion.

They are also not the most patient of breeds. They will react best to short and repeated periods of treat training.

It is important that their owners lay out the rules for acceptable behaviour and establish themselves as the leader. In doing so you will have both an obedient and very loving companion.

There was a French Bulldog on the Titanic on its way to America on the ship’s stricken maiden voyage. The dog was a show champion Ch. Gamin de Pycombe. Sadly, like so many of the passengers, little Gamin perished. The owners had insured her before the journey for a sum equivalent to around $20,000 in today’s money.

Although a French Bulldog has never won Best in Show at the Westminster Kennel Club Dog Show, the same French Bulldog did win best of breed for 5 consecutive years in the 1950s.

Ch. Bouquet Nouvelle Ami only relinquished the title after she was retired, and her owner went on to win Best of Breed for the next 10 years with other dogs. A record that stands until this day and will likely never be broken.

The popularity of the French Bulldog is on the rise again. The American Kennel Club reports them as being the 4th most popular breed in the USA.